A headstone survey was carried out of the old graveyard in the 1980's and the data was stored on a computer database. At this time the graveyards were being tidied up and landscaped by the late Father Patrick Regan Parish Priest assisted by two local men Fran and Mickey Magill. Many local parishioners also helped out at various times with this clean up. The upper half of the graveyard was overgrown with bushes, these were cleared and new paths put down. The upper corner was levelled up with gravel which was hauled by tractors from Mulholland's pit in Ballymacpeake. Stones were gathered and these were used by Fran and Mickey to build a dry stone wall along one side of the graveyard. The stone wall along the car park was repaired by Francis Lagan, James McCloy and James Shaw, a new gate was also opened. The headstones were cleaned with a power washer enabling names and dates to be more clearly read. The computer Database quickly sorted the grave records into chronological order to reveal the earliest grave dating back to 1805. However it must be remembered that most data was taken from existing headstones, how many people were buried without headstones or whose graves are lost is unknown. Very little remains of the old chapel. Father Regan PP had the outline of the walls marked out with paving stones. A datestone belonging to the old chapel was discovered buried in the pillars of the new chapel. These pillars were being rebuilt back from the busy main road by stonemason Tommy Rankin. Father Regan arranged to have this stone and two holy water fonts placed into the remains of a wall of the old chapel. 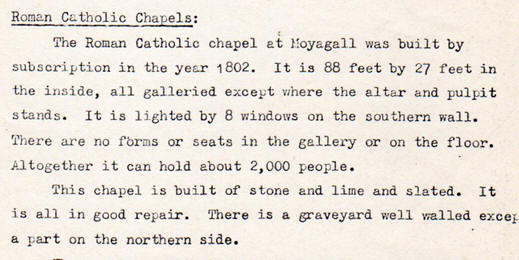